We at Newborn Care Solutions are so amazingly privileged to have a team of amazing mentors for our students and also available as Expert Resources to our parents! Today, on their FIRST BIRTHDAY, we feature a story of Apio and Acen, a story that one of our mentors played a huge role in creating. Annie Duguid is a Newborn Care Solutions Graduate and one of our Company Expert Mentors. She has over twenty years of experience caring for newborn babies including many sets of multiples, countless preemies, and over 9 years of experience working in Africa, running 3 of the largest orphanages for abandoned children on the continent.

We are so very proud of the work Annie has done, the way she has changed these girls' lives forever, and to call her one of our team!

It was around this time last year. I was visiting the USA and scrolling through my Facebook feed. Someone was fundraising for surgery for twins. This got my attention.

After years of a job I loved, caring for some of America’s most privileged babies and supporting their new parents, I had moved to Africa in 2006. Several visits had shown me firsthand that the suffering we see on TV is real, and when you hold it in your arms when you touch it, it’s very, very hard to walk away from. Before I knew it, I was living in Africa overseeing three homes for abandoned babies and caring for around 200 very vulnerable infants at any given time.

So naturally, the post about these newborn conjoined twins needing urgent assistance to transport them to a larger hospital was of interest to me. They had loving young parents, so didn’t qualify for assistance from the organization I worked with or any others that I could think of, and yet they clearly needed help. 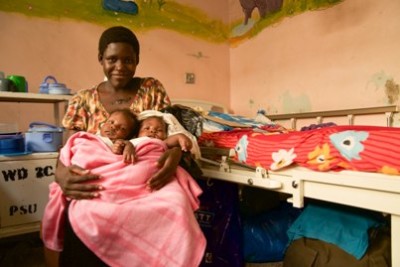 I’d been in many rural villages like they were from; the kind where you eventually have to park your 4WD and get out and walk to reach the mud huts, because the footpath you’ve been driving on for hours has disappeared completely.

I’d been in many small-town hospitals like the one they were born at; the maternity wards with the handful of rusty metal beds with filthy thin mattresses and a broken incubator in a corner. You try not to touch anything and resist the urge to hold your nose, and yet women give birth there every day with little support.

There was no doubt that they would not survive long if something wasn’t done.

I quickly became involved and knowing that arrival at the larger hospital definitely did not ensure their survival, contacted friends to check on them as soon as they arrived. I had heard of and been involved with, other sets of conjoined twins at that hospital, and was always devastated when something as simple as oxygen running out had ruined any chance of a happy outcome.

Acen and Apio were 5 days old and very sick when they arrived in the capital city. The best pediatric surgeon in the country and a friend of mine gathered a team and saved their lives that night. They were able to fix colostomies so that the girls, joined at the hips, could breastfeed. 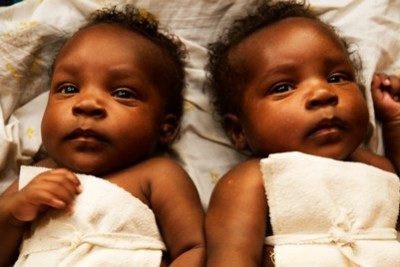 We quickly began to discuss how to help give the girls the greatest chance to live a normal life and by the time I visited them a few weeks later, there was already talk of trying to bring them to America for the separation surgery. While three amazing American adoptive mothers began to fundraise and work through the piles of red tape to make it possible to bring them over, I worked on the Ugandan side of things. I was still working my other very full-time job and would run up to the hospital in the evenings and weekends to take photos of scans on my I-phone to email to the American hospitals. Before long, we were thrilled to have Columbus Nationwide Children’s Hospital lined up, and the visa process well underway.

Faced with a 36-hour journey through cold Europe, I began working on some logistical details. After many hilarious trips back and forth to the hospital and around town and a lot of help from friends, I had passport pictures, custom made 4-way cloth diapers, baby sleepers that buttoned together, and a used bought-off-the-side-of-the-road jogger stroller that was ALMOST wide enough to lay the girls side by side.

Probably one of the bizarre, and yet most rewarding, experiences of my life was taking the girls from an extremely overwhelmed, outdated, struggling, third-world hospital to the amazing facility that is Nationwide Children’s. When I carried the girls out of the hospital in Uganda, I nodded to the nurse on duty and said “I’m taking the girls to America for surgery, ok? She looked up from the patient she was attending to across the room, smiled, and said ‘good luck’ and that was that. After taking everyone to my house and cleaning up, we drove the 2 hours to the airport, girls in my lap, dodging chickens, goats, and crater-sized potholes. After just 36 hours in transit which included 3 long flights, a lost stroller (‘you’ll just have to carry the babies the rest of the way, ma’am!), arguing with airline staff that I couldn’t change their diapers and clothes in the plane toilet, and many firsts for their 19-year-old mother Esther, we finally arrived in Columbus. An ambulance with a transport team and the Chief of Surgery was waiting on the tarmac for us, just to ensure the babies were stable and transported safely. Despite the fact that I knew the amazing level of care waiting for us, I was still hit with a large dose of reverse culture shock. I was given my security key to get to the girls floor, saw the huge flat-screen TV in the private room, and quickly took Esther to check out the ice cream shop.

The girls were taken into surgery the following day to make a plan. Over the next 9 months, they had many surgeries to place tissue expanders so that they would have sufficient skin to repair everything after the separation surgery. Just two weeks ago, after 16 grueling hours of surgery, they finally became two separate individuals. Today, we joyfully celebrate the 1st birthdays of Acen and Apio, and the bright future they can now look forward to!

Tonya Sakowicz
https://www.newborncaresolutions.com
[email protected]
Posted in General | Tagged
share this
Related Posts
Can We Slow Down and Enjoy Our Babies Where They Are?
General

Almost every parent in the US has felt the pressure of Western culture to do everything possible to speed up their baby’s development. We want to know how early each […]

When selecting the best car seat, it is not as simple as one-size-fits-all. You may be surprised to learn that there are quite a few factors that go into choosing […]

When I first heard about Happiest Baby’s Snoo I must admit, my knee-jerk reaction was “Well, there goes my job!”. The reality is as a former Nanny and now Newborn […]

Our company is dedicated to providing the very best quality products and service. Happy customers are our number one goal! We strive to be the best in the industry and innovate our products to meet the ever-changing industry needs.
© 2021 Newborn Care Solutions. All rights reserved | Made by a Peanut.